After receiving his medical degree in 1979 from Thanjavur Medical College in Thanjavur, Tamilnadu, India, Prof SM Chandramohan completed his MS postgraduate training at Madras Medical College and Government General Hospital, Chennai. He was the best outgoing candidate of that year for the entire state of Tamilnadu and was honoured with a gold medal by The Madras University in 1984. He then worked at a rural Primary Health Center which catered to 47 seaside villages of Thanjavur District under the supervision of the Director of Public Health. Later he joined the prestigious MCh Surgical Gastroenterology super speciality program at The Madras Medical College under the leadership of Prof N Rangabashyam. He was the seventh person to qualify with MCh Surgical Gastroenterology degree in the entire country.

Prof S M Chandramohan’s clinical interests include surgery for Upper GI Disorders which include both benign and malignant oesophagogastric disorders. He has special interest in the management of gastric cancer, oesophageal cancer and GE junction tumours. His pioneering work in the management of caustic injuries of the upper GI tract is widely acknowledged. His innovative surgical techniques in the management of complex pharyngo oesophago gastric strictures due to corrosives is being followed all over the world. Several hundred patients live to tell their story.

His research interests include epidemiological aspects and newer operative strategies to optimise the outcome in gastric cancer and oesophageal cancer patients and management of postoperative complications. He has also participated in the development of minimally invasive, endoscopic and laparoscopic operations. The department pursues active research in managing advanced gastric, GE junction and Oesophageal malignancies and complex corrosive strictures of the oesophagus and stomach.

His technique of coloplasty for reconstruction, using stomach for reconstruction in the presence of antral stricture; the taking up of conduit to the neck using camera sheath technique; the partial stapling technique of the anastomosis; totally stapled pharyngocaecoplasty; strategies to be adopted for failed conduits; revision anastomosis technique in the neck, self-dilatation technique which can be done by the patient themselves have created a major impact in easing out the management of these complex problems. He has defined a new entity called “Gastrocele” in patients with double strictures. He has described a new working classification for Isolated Gastric Strictures which won the Hari Om Ashram Award from the association of Surgeons of India for the best research work.

New concepts in surgical training and education has been a major focus of his academic interest. He has authored more than 300 scientific presentations, papers, editorials, textbook chapters, abstracts and video productions. He has been an invited speaker for more than 100 regional, national and international lectures on the subject of oesophagogastric surgery and laparoscopic surgery. He is a member of the Board of Studies in Surgical Specialities, in The Tamilnadu Dr M G R Medical University, Chennai. He has been director for more than 50 courses and workshops on advanced gastroesophageal surgery. He was instrumental in increasing the MCh Surgical Gastroenterology postgraduate seats from two to six per year the largest number in the entire country. He has been instrumental in encouraging post graduates and even undergraduate medical students in doing original research and presenting their work in national and international forum fetching them awards and grants from well recognised societies.

Apart from patient care, academics and research he is also keen on conducting programs to create awareness in the society. The notable programmes which have helped the society are:

He is the founder of ESOINDIA ( an organisation which offers dedicated service to patients with diseases of Esophagus, Stomach and Obesity).The Gastric Cancer Help Group and the Esophageal Patients Support Organisation formed by Medical and Para medical personnel along with survivors and supporters formed by him helps not only the patients but also conducts regular awareness programme and help research projects by young doctors. 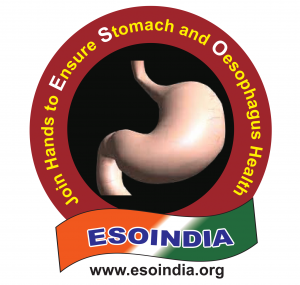